My work explores the nature of Mexican American linguistic mestizaje: Chicano Spanish better known as Spanglish. Spanglish, a hybrid of Español with American English, appears in various forms: Tex-Mex, Espanglish, Chicano Spanish, Pachuco, etc. throughout the United States and is growing ever more recognized. Spanglish culture carries over from Chicanos growing up in the United States identifying between two cultures, Anglo-American culture and Mexican or Latino culture, yet totally belonging to neither.

I use nostalgic objects and domestic spaces ( e.g. children’s toys, house clocks, plants, picture frames, etc.) drawn from my childhood to describe the Spanglish culture I grew up in. Raised in a bilingual home of Mexican Spanish and American English speakers, language and culture crossed over to the point where Spanglish-ness was inevitable. Duality of identities plays a strong role in my work as I come from a dominant mestizo bloodline of Mexicans and Tex-Mex Chicanos. Honoring this lineage, I reference the Aztec indigenous Mexican history alongside the Mestizo Chicano present. Overall, I focus on the thin line of the ‘in-between’. I speak to both personal and collective identity in my work and to the English, Spanish and Spanglish speaker. The significance of cultural identity–physically and conceptually are important themes throughout my work.

Drawing from personal life history and experiences of the new and the familiar, the lost and the found, allows me to better engage with the person across from me and vise-versa. We all communicate in a multitude of ways and language both visual and spoken are essential in engaging and understanding the world in which we live in. 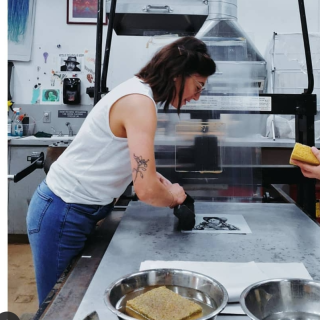